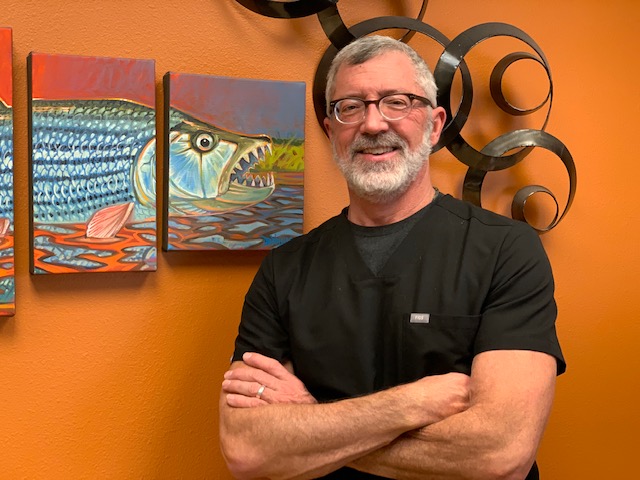 Dr. Jeff Olson follows his father, grandfather and great-grandfather by receiving his D.D.S degree and practicing in South Dakota. He attended the University of Minnesota for undergraduate and was awarded his D.D.S. degree from Creighton in Omaha, Nebraska in 1988. He has lived in Rapid City his whole life and has dedicated a large portion of his time to giving back to the community.

Dr. Jeff has been married to his wife, Lanette, for 29 years. They have two children, Avery and Jack. Avery is in her second year of OBGYN residency in Honolulu, HI and Jack graduated from the University of Nebraska with a degree in biology.

Dr. Jeff is a member of the Donated Dental Program and also treats others that are under served in the community through the Title 19 program. Additionally, he has spent time on the Care Mobile Dental Bus caring for low income children and volunteers at the St. Francis Mission on the Rosebud Indian Reservation. Dr. Jeff is a retired Game, Fish and Parks Commissioner and a past president of Rushmore Rotary Club, Black Hills Sportsmen’s Club and the Black Hills Chapter of the National Wild Turkey Federation and Safari Club International. Dr. Jeff co-founded and continues to chair the South Dakota Sportsmen Against Hunger Program which donates thousands of meals annually to needy families across the state. He is active at the Outdoor Campus where he teaches people of all ages about the outdoors and shares his passion for hunting, fishing and wild game cooking.

Get in Touch
Family Dental Care